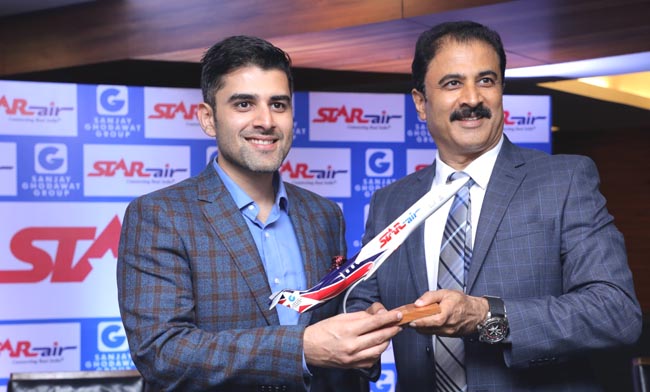 AsiaOne, recently honoured noted entrepreneur Mr. Shrenik Ghodawat, with the “40 Most Influential Asian Under 40” recognition, which is considered as one of the most admired recognitions in the entire Asian region amongst the business community. This award was bestowed upon him for his valuable contribution towards the remarkable growth of Star Air, which he heads in the capacity of its Managing Director.

Star Air in a very little time stunned the whole aviation industry and established a special place in people’s hearts. Launched in January 2019, Star Air has witnessed a quantum jump in its business and becomes the only private airline company in India that has operated in profit in its very first year. Shrenik is the brain behind Star Air, whose fine business acumen, smart strategies, and ability to make the right decisions on time, helped the airline to have such a wonderful start.

From a few destinations to 10 operating destinations, a few hundred passengers to 66,000 thousand passengers, one aircraft to 5 aircraft, within a year itself tell the enormous success of Star Air in its maiden year. Recognizing his contribution towards Star Air’s immense success, AsiaOne recognized him with this great honour.

This young, dashing, and tech-savvy industrialist is also widely admired for modernising the infrastructure and implementing best business practices at Sanjay Ghodawat Group, which is a business conglomerate having its presence in 14+ diverse business verticals ranging from Agro to Aviation, Salt to Software, Education to Mining, Textiles to Petrochemicals, and much more. Shrenik is the MD of SGG.

An official associated AsiaOne says: “Forty is an age where most of the people want to become financially strong, attain maturity to carry family responsibilities and move ahead in a chosen career or business path peacefully. However, there is another category of people, who think beyond all these things. Such people are the ones who dare to dream big, achieve great superior heights in their career and make an indelible mark in the entire industry with their sharp business acumen, unparalleled diligence, and boundless courage. Mr. Shrenik Ghodawat, MD – Star Air, is one such rare entrepreneur who has touched the lives of millions with his countless endeavours in a very less time.

“It is truly remarkable to hear that AsiaOne, a trusted name in the field of media, that is admired by the common man to decision & policy makers, entrepreneurs to industry giants across the Asian and Middle East region for its quality and unparalleled business research, has chosen Shrenik for this great recognition,” asserts Sanjay Ghodawat, Chairman – SGG.

“When your hard work is admired on a global platform like this then it gives immense pleasure, a great sense of satisfaction, and strength to move ahead with much more vigour,” says Shrenik Ghodawat, MD- Star Air. “I am completely enthralled to receive this rare honour from a company which is an established & trusted name in countries like India, Dubai UAE, Singapore, Thailand, Indonesia, Kuwait, Oman, and Qatar.”

AsiaOne is a prominent business conglomerate that deals in Real Estate, Gems & Jewels, Publishing & Research, Recruitment Services, and Media Consulting. The group is a known name in the field of media and research, where expert analysts, every year pick some of the best brands and businesspeople from entire Asia after a thoughtful research and evaluation.