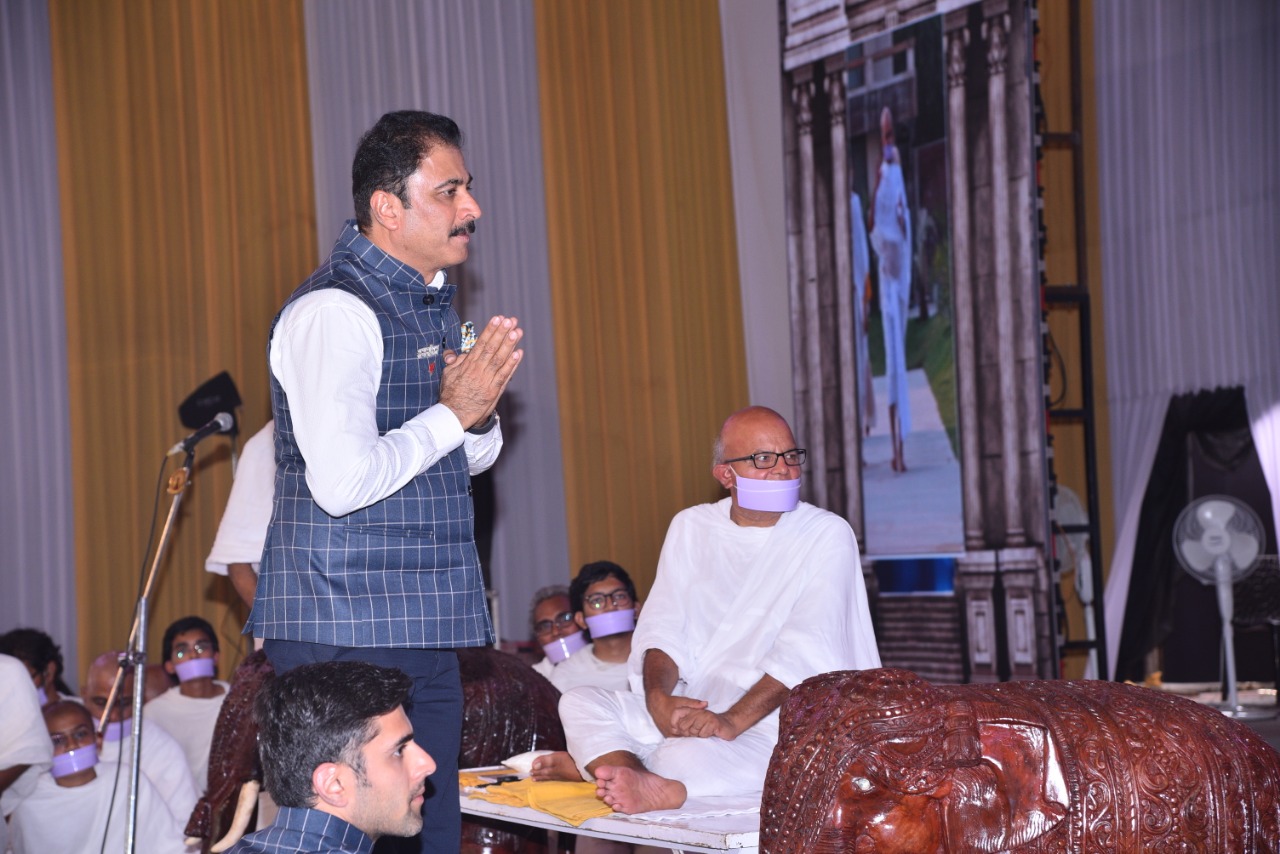 The Jain Terapanth Religious Head, his holiness Shri Acharya Mahashramanji recently came to the Sanjay Ghodawat University on 28th Feb 2020 to bless his followers on the occasion of completing 25 years of the SG Group.

An event was organized by the SG Group and the Sanjay Ghodawat University to welcome Shri Acharya Mahashramanji. The International School performed dances with the theme ‘colours of India’ to welcome him. A special musical group performing on the ‘dholaks’ was called from Kerala to welcome this noted spiritual leader. Also, there was an enchanting floral tribute given to him as he arrived at the Sanjay Ghodawat University campus at Atigre on barefoot from miles apart.

At the Rukadi village diversion, all the dignitaries including the Chairman Sanjay Ghodawat, Mrs. Neeta Ghodawat, Mr. Shrenik Ghodawat, Mr. Vimal Runwal, Mr. Vinayak Bhosale, Dr. V A Raikar, Dr. Telsang, Dr. Hirdekar, Dr. VV Kulkarni and other heads, teachers, students as well as the staff from SG Group were present to welcome Acharya Mahashramanji. A cavalcade of luxury cars and bikes went side by side as he was moving towards the University campus. All the devotees raised slogans to welcome him.

Shri Acharya Mahashramanji addressed the crowd of thousands gathered to hear him. He stressed on following values like non-violence and peace in one’s life. He asked the students to desist from evils like addiction to any intoxicating substances. He encouraged them to be better human beings and able citizens of the nation. During this time, the Chairman Sanjay Ghodawat also welcomed him and said that after his parents, it was the guidance and teachings of guruji that he followed all his life that ultimately helped him taste success in business and other ventures. He declared Rs. 1 crore and 50 lakhs for the construction of the Jain World University building as his gesture towards his Guru. Thousands of devotees thronged to hear the words of Acharya Mahashramanji and took his blessings and guidance during this time.

All the devotees, invitees after the discourse, partook in the grand lunch arranged for them by the Sanjay Ghodawat Group on the occasion in the University campus.