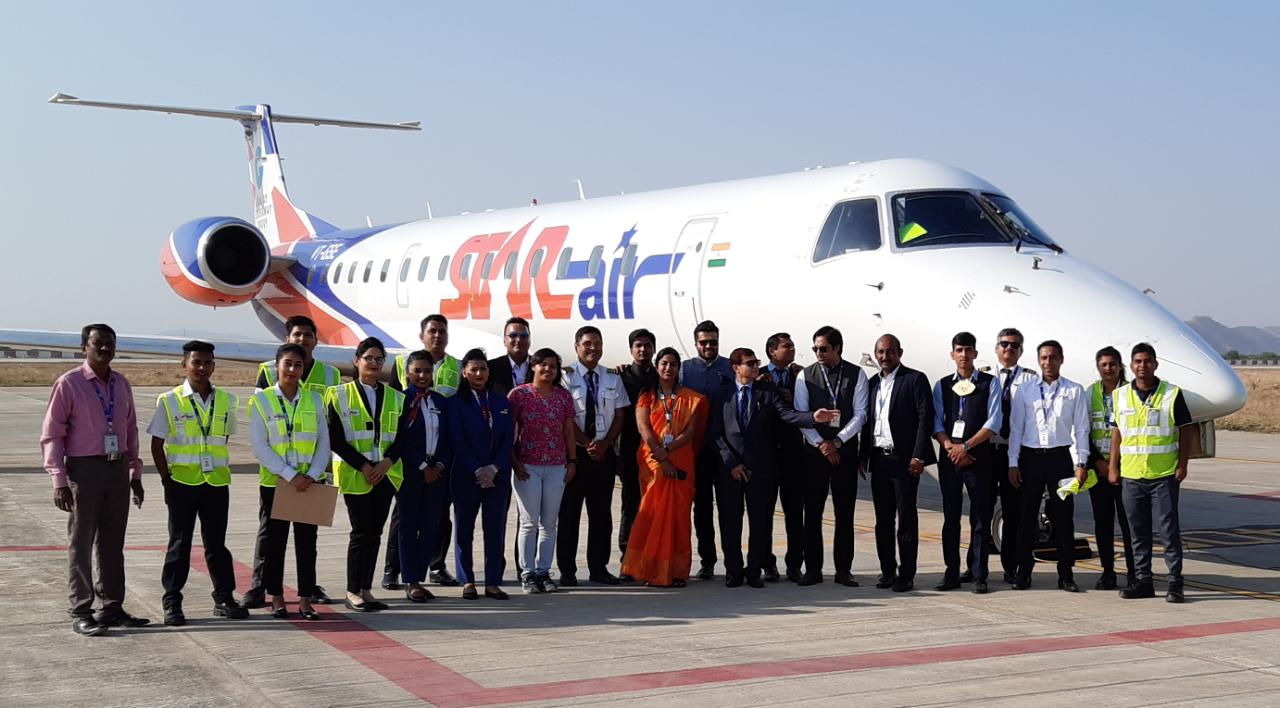 Star Air, a regional commuter airline, which stunned the whole Indian aviation industry with its fabulous growth in the very first year of its operations, recently added another feather in its cap. On 16th March 2020, Star Air wrote history by becoming the India’s first airline to start direct flight services between Indore (Madhya Pradesh) and Kishangarh (Ajmer – Rajasthan) under the popular RCS-UDAN scheme.

The airline scheduled a few mega launch events at both Indore and Kishangarh airports, where scores of high-profile dignitaries had come. Mrs. Aryma Sanyal – Airport Director (Indore) inaugurated this historic Indore-Kishangarh flight service at a grand ceremony held at the Indore airport on 16th March 2020. Along with her, Mr. Bikar Singh – Chief Aerodrome Security Officer from CISF, Mr. Sunil Bansod – ATC Incharge, Mr. Shrivastav – Terminal Incharge, and many other senior dignitaries from the AAI were also present at this function.

It is quite interesting that in a very limited time, the airline has not only made this route operational but also successful in creating a buzz about this route in a very shorter span of time. Star Air on 18 February 2020 announced to launch this service and subsequently opened its sales. Since then there has been immense euphoria amongst millions of people who were aspired to see such service for decades. People’s delight can be gauged from the fact that since this announcement, its sales hotline number got flooded with enquiries at enormous scale.

Rajasthan is the seventh Indian state where Star Air is providing its flight services under the RCS-UDAN scheme. Interestingly, Indore and Kishangarh, which are almost 550 kilometres apart, had not been blessed with direct flight connectivity prior to Star Air’s launch. People had to spend more than 10 hours to cover this distance that too with much hassle and discomfort. But now they can cover this distance in just 1 hour.

“Star Air is the first airline, which has fulfilled the aspirations of millions of people, by starting the first-ever direct flight services between Indore and Kishangarh,” says Mr. Shrenik Ghodawat, MD – Star Air. “For many decades, people of Belagavi, Karnataka were also aspired to get benefitted with affordable and swift transportation services to

Kishangarh (Ajmer). Considering people’s demand, the management of Star Air has further decided to extend the benefits of its Kishangarh service to a larger number of people living across the geography of Belagavi by providing flight services between Belagavi and Kishangarh (Ajmer) with one stop (via Indore) from 16th March 2020 itself.”

A Gift for Travel Enthusiasts and Businesspeople

This service will help travellers to a great extent as Kishangarh, a place close to Ajmer, is one of the most famous tourist destinations in India. This route is expected to make travel easy for tourists, who love to explore palaces, forts and places of religious importance. With the commencement of this route, now people can fly easily to Kishangarh and take a glimpse of the famous Ajmer Sharif Dargah (30 KM), Pushkar Lake (48 KM), Phool Mahal Palace (4 KM), Roopangarh Fort (27 KM) etc., much comfortably than ever before.

Travellers can also visit Salasar Balaji Dham Mandir in Sikar, which is the only temple of Lord Hanuman in entire India, where he is idolized in moustache and beard form. It is just 156 KM from Kishangarh.

Also, businesspersons, who are in marble businesses, can immensely save their travel time with the launch of Indore-Kishangarh and Belagavi-Kishangarh (with one stop via Indore) routes. As this city, Kishangarh, known as Marble City of India, is very popular for its exquisite marbles globally.